We know the cause and cure of malaria. Why do we still have it around?

Challenges that arise from diseases that emerge amongst the poorest in the population are yet to be understood. For many of these diseases, cures and vaccines have already been developed, and are ready for commercial markets. However, many life-threatening and endemic diseases without a successful vaccine still exist. An example of this is malaria, caused by Plasmodium parasite, carried by mosquitoes. Of the four different types of Plasmodium parasites that cause malaria in humans, P.vivax and P.falciparum are most common, where the fatal consequence are due to P.falciparum.

Malaria is the cause of approximately 500 million new cases and over a million deaths annually, worldwide. People, especially children and pregnant women, who live in sub-tropical climates, are particularly vulnerable, as hot and humid areas facilitate the breeding of Plasmodium infected mosquitoes.

Sonia Shah, in her book The Fever, states that the reasons underlying why Malaria still exists in today’s society are due to scientific, economic, cultural and political challenges, which have prevented the development of an effective vaccine. Researchers have agreed upon the complexity of the pathogen, and research has produced effective cures, used as treatments for affected individuals. Yet, it is still a struggle to develop a vaccine. This is because the parasite changes its morphology throughout its life cycle in the host organisms: mosquito and human.

The elimination of mosquitoes is done through environmental control, and it is the responsibility of individuals as well as the society.

As malaria develops, it starts to interfere with people’s daily activities because the more people get sick, the less they will work, and thus, the more likely they end up in poverty. In addition, people who live in societies ridden with the disease normally see malaria as a normal issue of life. People that work in the health sector may start to think, ‘If they think it is a normal problem, how do we get them to change their behaviour to prevent further transmission, get diagnoses and treatment, and to make sure they do not get infected again?’ The answer to this question is much more complicated than pure science. These challenges emerge into a more complex discussion; it has become a political issue. Policies in these societies tend to rely on cheap and highly available tools, such as the use of insecticides. For instance, a large-scale experiment conducted in Sardinia during the period 1946-1950 aimed to develop a new strategy to fight malaria by spreading DDT over the island. This experiment resulted in the elimination of malaria using solely DDT; however, the Anopheles mosquitoes were not eradicated. This has proven that the use of insecticides, without any other interventions, work only short-term.

The elimination of mosquitoes is done through environmental control, and it is the responsibility of individuals as well as the society. According to the American Mosquito Control Association (AMCA), mosquito control is important, not only for public health reasons, but also for economic reasons, as it can negatively affect livestock production. The effects of livestock production can result in a decrease in the products from respective animals affected by malaria, or any other mosquito borne diseases. Again, this is reflected back to the poverty-disease cycle; where poverty can cause various illnesses and vice versa.

Although malaria prevention is now well known, millions of people are still greatly affected by it. One of the most effective ways to prevent further malaria transmission is to cover clear and stagnant water, where mosquitoes lay their eggs. This, however, is not very efficient because societies that have high malaria prevalence usually have clear stagnant water not only at their homes, but also in the pits after a heavy rainfall. It is not only the responsibility of every household to keep this behaviour, but it is also the responsibility of the society. Without proper information, it is difficult to raise awareness to respective households.

A preventive medication, malaria prophylaxis, is another well-known and widely available means to prevent transmission from malaria-infected mosquitoes to humans. Travellers coming from non-infected areas, pregnant women as well as children from high malaria prevalence areas, are advised to take precautions. Nevertheless, anti-malarial medicine has to be used repetitively, and it does not have perfect success rate yet in malaria prevention. Furthermore, the emergence of drug-resistant malaria in countries such as India, limits the effectiveness of post-exposure drugs, existing in the today’s markets. A vaccine, therefore, is of great significance in the reduction of malaria prevalence and incidence. 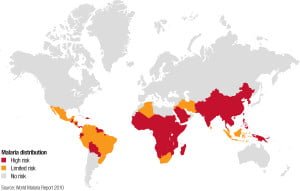 For over a decade, several researchers have been trying to develop an effective malaria vaccine. Some of the vaccines under development have already reached clinical stage. The Bill and Melinda Gates Foundation awarded their research grant in Grand Challenges in Global Health to Dr. Stefan Kappe, who has dedicated a decade of his career on developing malaria vaccine by using a weakened form of the parasite to invoke an immune response. This genetically attenuated parasite still undergoes clinical trials.

To date, there is no licensed vaccine against malaria, or any other human parasite, even though the development of a vaccine looks promising. Nevertheless, before any medical product reaches the commercial market, it needs safety approval at different stages of the development. Thus, a commercial, and ready-to-use product is still years away.

Assuming that there is an effective vaccine against malaria on present day, another question then comes to mind: how will we distribute it to millions of people who suffer from the disease, or people who are exposed to the pathogen every single day? How much would it cost to distribute this vaccine to these people? The answers to these questions are complicated because it involves several factors, namely cost of production, access and availability, and population-level effectiveness.

Looking at present day, and the possible questions and other thoughts on malaria vaccine, the distribution of malaria vaccine to the general population is nearly impossible. With this in mind, the World Health Organisation recommends high malaria prevalence areas to control, and possibly eliminate the disease. Four key points suggested by the WHO included; ensure the use of evidence-based guidelines, attention on updates of the global progress, improvement of infrastructure and strengthen malaria surveillance, and identification of potential threats to control and elimination of malaria in new areas.

It is difficult to tackle the malaria-related challenges from societies with high, as well as low malaria prevalence. Solutions that will work long-term will take several years to implement, but it could possibly improve all other factors that could attribute to malaria cases, such as an improvement of standard of living.

Difficulties to understand the complexity of malaria remain, even though the general population knows basic prevention and cure for the disease. Research on malaria vaccine is still ongoing and it will take a couple more years for us to see its effects. Normally, a paper would conclude its discussion by, “further research need to be done…” For the case of malaria, and other diseases, in which a vaccine is not yet developed, a deeper understanding of the complexity of the science behind the disease is indeed to be acquired.

2015-05-25
Medicor Editorial Board
Previous: Mindfulness Through Meditation and Breathing
Next: The First Successful Uterus Transplantation

Global surgery: moving from the neglected stepchild to central aspect of global health