As the sunlight fades from our Swedish world very quickly, we take a look at the nature of our relationship with the sun, and the potential danger our Scandinavian sun worshipping habits may hold.

As I sit here, a few weeks after my south-east Asian vacation, peeling skin like a strange snake lady, it’s an apt time to ponder the frustrating trauma of sun induced skin damage. As a native of Ireland, I am blessed with skin so pale that it can only be classed as white in the summer months, as throughout the winter I’m a definite blue, and as a result seem to burn no matter how much I bathe in sun cream. Let’s take a moment to follow the sun light that we of Swedish residence spend the summer chasing, as winter ragged darkness has turned us into hypnotic moths.

So you are on the beach, near or far, and you present your skin in worship to the great big ball of fire in the sky to feel its soothing warmth. Let’s, for a moment, hypothetically climb aboard a sunray and follow it earthwards. The ray of interest is of ultraviolet (UV) light, a light that is of higher energy than that which we can see with our eyes. The protective ozone layer filters out the highest energy and most dangerous UV-C radiation, but it lets through some UV-A and UV-B, which reaches our poised beached bodies.

As you feel the warmth, your skin is being bombarded with UV rays. If you are not of a naturally dark pigmentation, this UV is detected by pigment producing cells in your skin called melanocytes. These cells rush to protect you against potential damage and start producing and redistributing a dark pigment called melanin. You can think of them like putting up lots of tiny brown umbrellas to protect the deeper down and more important cells (more on that later), and over time a tan will develop.

When the UV-B ray hits
the DNA, connections
between nucleotides
form that are not
supposed to be there

At some point in time, an ancestor of mine acquired a random mutation in a melanin producing gene which meant that they were unable to produce this protective pigment any more. Normally, if a mutation arises which is particularly detrimental to an individual’s heath, it will not spread, because that carrier will be less likely to produce offspring, due to ill health or early death. In the case of melanin non-production, this is likely to have stuck around because this ancestor had already migrated to an area of the world where direct sun exposure was not common enough to pose a high risk (logical, if you have ever experienced the 300 odd days of rain in Ireland per year). And hence, those with a milk-bottle like complexion like my own are more susceptible to sun induced skin damage, because we cannot produce that protective pigment melanin. Or to wrap up my metaphor, we do not have any little brown umbrellas, and are therefore much more likely to get wet.

It is important to note here, whether the melanin protective mechanism is present or not, (darker pigments are still not completely protective, UV-B can still sneak through in some parts), dangerous UV-B rays reach the epidermis, the outermost layer of the skin. Even if you do have the ability to tan, unfortunately this process takes quite a period of time, and therefore a lot of damage can be done before your protective layer kicks in. In the meantime, UV rays penetrate the cell layers and enter individual cells, whizz past their cram packed contents and hit that central bag, the cell nucleus. The nucleus holds the genetic blueprint, the DNA, which carriers your genetic code in four molecules called nucleotides (Adenine, Thymine, Cytosine and Guanine), A binds to T, C binds to G and they make up the rungs or steps on that DNA twisted ladder picture you have in your head. The UV-B ray hits the DNA and jiggles about the delicate chemistry with its high energy, and causes “dimers” to form – connections between nucleotides that are not supposed to be there. 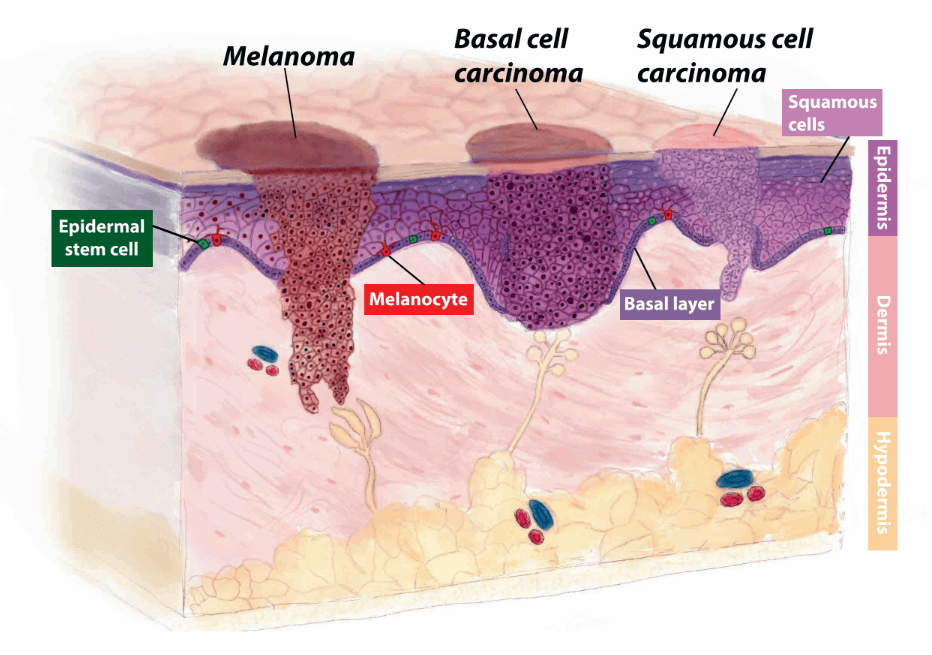 As UV ray after UV ray come crashing into the DNA, and the delicate structure takes a beating, the cell environment starts to panic. Very quickly, blood vessels dilate and extra blood rushes into the skin, to nourish and aid those stressed cells. All this extra blood makes your skin appear red, swollen and hot to the touch. Inflammation then sets in, in a bid to repair the damage, increasing the swelling and pain.

A cell is designed to be able to recognize DNA damage, and to act to repair it, or in instances where the damage is too great, to initiate cell death so that these errors are not passed on to the next generation of cells. Most of the badly damaged cells in your outer most skin layer that experience UV-B damage will initiate apoptosis (cell death), die and shed off, hence the typical skin peeling after a bad burn. Even if something is not working within the cell repair pathway, and one damaged cell manages to survive, its potential for harm is not too great, as it will be shed off very soon from your ever regenerating outer skin layer. That, in itself, is an innate protective mechanism; your outermost and most “exposed” cells will flake off and die instead of sticking around to pass on potential damage.

The real danger lies in the cells that sit deeper within the skin layers. These cells are longer lived cells and give rise to many more daughter cells in their lifetime. These stem cell-like cells provide the upward movement of new epidermal cells to replace shedding skin. If these cells are hit with UV-B rays, and acquire DNA damage, and some of them manage to survive it, here you have the potential starting point of cancer development. This single damaged cell can survive and acquire more and more mutations, which make it grow in an uncontrolled way, forming a mass of damaged daughter cells, a tumor. These cancers are of the basal-cell and squamous-cell cancer variety, the most common types of skin cancer. Melanoma, the most deadly form of skin cancer, arises when the damage occurs directly in those melanocytes, the melanin producing cells.

As you recover from your sun exposure, your burn slowly fades as the inflammation dies down, new cells are rushed through to compensate for all those damaged cells on the surface.  You peel away to a fresh new skin, and you awe at how your body has worked the wonder that it is and regenerated itself and all is well again with the world. But crucial damage a few layers down may be done, and will not be repaired that day, and that cell will sit, like a ticking time bomb under your skin.

It takes one damaged
cell to cause cancer

In contrast to some other cancer types, the rates of skin cancer are on the rise quite dramatically, due in part to an increase in damaging sun exposure habits. In Sweden alone, there are 45,000 new cases every year. Despite having a sun-deprived climate Sweden peaks the European statistics, due to sun-seeking habits and Solarium tanning. Although a melanoma caught early is easily treated with local surgery, but if caught late, and already malignant (spread throughout the body) the 5 year survival is soberingly low at 15-20%. Malignant melanoma is the fastest growing cancer in Sweden.

The repair and regeneration ability of the human body is awe-inspiring. But it is not infallible. The higher the exposure to mutagenic agents, the greater the chance that a mutation will arise that cannot be repaired.

It takes one damaged cell to cause cancer.

Look after your skin. •

This article was previously published in: Medicor 2016 #3