It actually directly funded a major breakthrough in Amyotrophic Lateral Sclerosis (ALS) research. Whole-exome analyses of 1,022 familial ALS (FALS) cases and 7,315 controls were conducted, making it the largest ever study of genetically inherited ALS. Researchers identified a significant association between loss-of-function NEK1 variants and FALS risk. Even though NEK1 is only associated with 3% of all diagnoses, treating the NEK1 gene successfully will revolutionize the lives of around 168 people every year – and that is something. (Nature Genetics, September 2016) 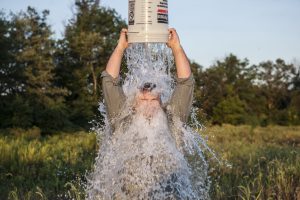 The monoclonal antibody aducanumab has been shown to reduce Aβ plaques in mice and now patients with Alzheimer’s disease (AD). In a transgenic mouse model of AD, the antibody has been shown to enter the brain, bind Aβ and reduce both its soluble and insoluble form. In patients, monthly aducanumab administration for one year was accompanied by a slowing of clinical decline. This is the most promising drug in the AD field in a very long time. (Nature, August 2016)

Science fiction seems to have come to life in a publication where researchers used what they refer to as mind-controlled nanorobots. One of the biggest problems in treating mental illness is that symptom flares are unpredictable. These nanorobots could be injected into patients’ brains and, after detecting abnormalities in neuronal activity, release the medication they are carrying. The robots consist of a shell of DNA strands and iron oxide nanoparticle “gates” that can open or close depending on the surrounding electromagnetic energy. (PLOS One, August 2016)

Mice and rats can now be made transparent by removing water and lipids from organs, leaving behind only proteins. If these proteins are subsequently labeled with fluorescent markers, complex structures can be imaged while leaving the body intact. In a recent publication, neuronal connections and blood vessels were imaged in the finest detail, shedding light on complicated mechanisms, while also reducing the amount of rodents necessary for each experiment. (Nature Methods, August 2016)

Referred to as the modern “geese that saved Rome”, Northern cardinals have been shown to provide a major defensive line against the West Nile virus in Atlanta, Georgia. The mosquito-borne disease has infected an estimated 780,000 North Americans since 1999. Georgia has proven surprisingly immune, considering that 1/3 of Atlanta-area birds have been infected. The virus is known to circulate among animals and only sometimes spill into nearby human populations. Northern cardinals are far less likely to have enough virus circulating in their blood to transmit the disease back to feeding mosquitoes. (American Journal of Tropical Medicine and Hygiene, August 2016)

Leishmaniasis, Chagas disease and sleeping sickness are caused by different parasitic infections and have for long been neglected because they afflict some (20 million) of the poorest people on Earth. If left untreated, they can all be fatal. Treatments up to now have been expensive and with severe side effects. However, researchers have reported a potential cure for all 3 diseases as they are all caused by similar parasites (kinetoplastids). Using a selective inhibitor of the kinetoplastid proteasome they found unprecedented in vivo efficacy, with mouse models of the 3 diseases successfully clearing parasites. (Nature, August 2016)

Researchers have successfully grown cornea cells in a petri dish. They developed ultra-thin polyethylene hydrofilms, upon which they were able to make sheep corneal endothelial cells (CECs) proliferate. CECs  are responsible for maintaining the transparency of the cornea but they deteriorate with age as vision begins to decline. When transplanted back to the sheep, these films could significantly restore optical transparency. It goes without saying that this technique might substitute corneal transplants for those suffering from impaired vision. (Advanced Healthcare Material, September 2014)[divider]

This article was previously published in Medicor 2016 #