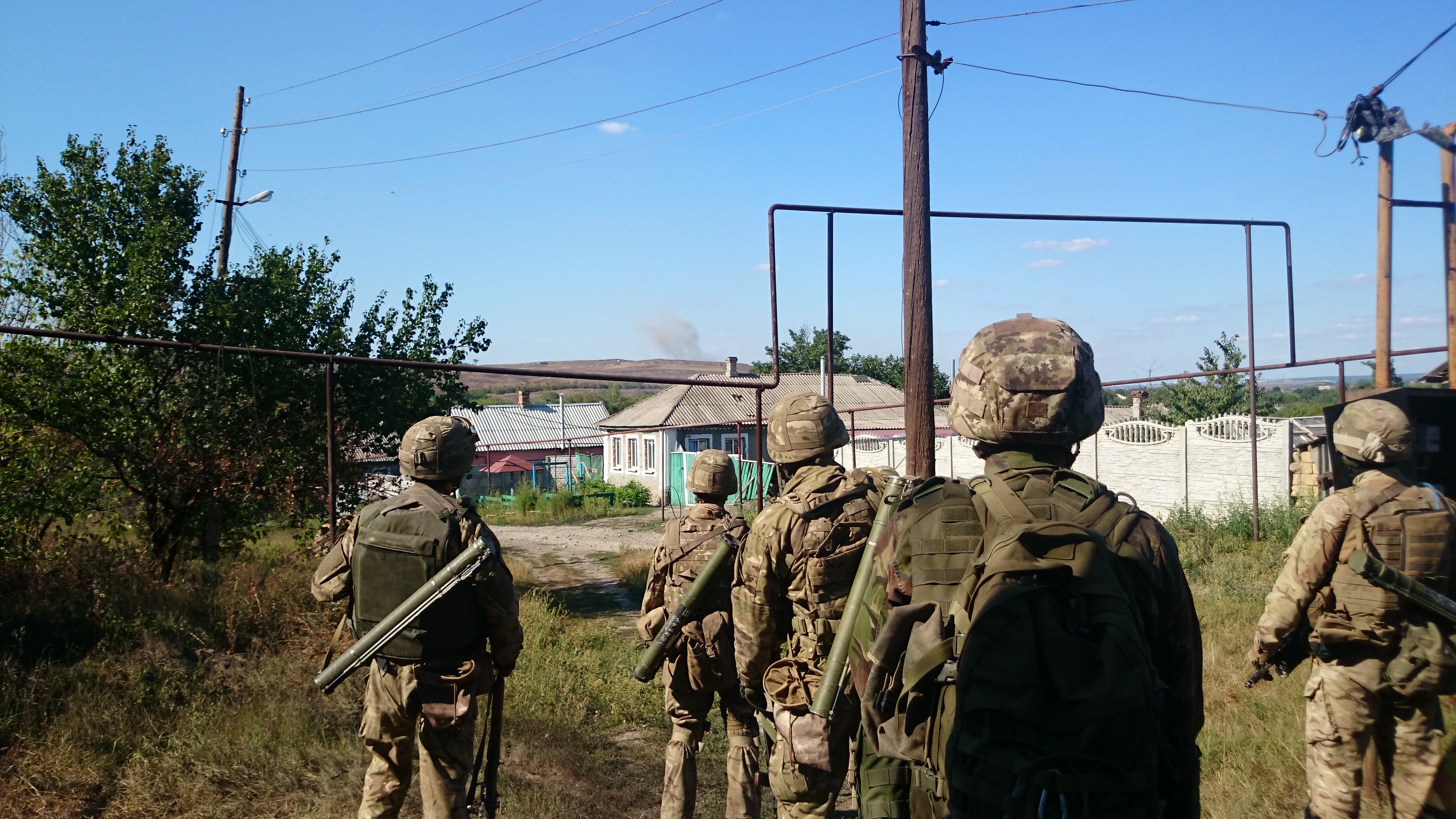 In the shadow of war

Konstiantynivka is the last stop for all trains coming from Kiev. Likewise, it is an easternmost town under Ukrainian government control. Areas to the east from this settlement are run by the separatists, aiming for revival of Novorossiya – a historical land to the north of the Black Sea. Among the supporters of either side there are thousands of civilians, dreaming of peaceful lives without bullets passing over their heads. How do they manage to coexist with soldiers living next door?

“Living here is a nightmare! It’s not a life, it’s a torture”, says Yulia, an inhabitant of the Donbass area, an industrial region located in the East of Ukraine. “People don’t want to go out of their homes, merely listening from which side the noises of shots and bomb explosions are coming. Since the war broke out I haven’t slept well a single night. It was a very difficult decision for me and my dear family, but we had to leave our hometown”, continues Yulia.

IN THE MIDDLE OF NOWHERE
As she and her friends report, there are regions in the Donbass area where one can hardly find a living soul and all the houses already turned into ruins. Civilians who decided to stay in the occupied zone must fight for their lives every day, because shops are closed and both water and power supplies are scarce. Many young people have emigrated to the neighbouring countries, belonging to the European Union, where studying and finding a decent job is much easier. The elderly are less flexible. They do not want to leave their fatherland. Being old and vulnerable, they will spend the last years of their existence in basements, having occasional breaks outside for breakfasts and dinners. As they reveal, nobody believes that the situation will improve any time in the future. Everything is expensive, prices for food and medicines have increased dramatically since last year. “Death is in the air”, says Natasha, a 50-year-old woman from Konstiantynivka. Apparently even in the Ukrainian capital, which is not directly affected by the armed conflict, the situation seems to be tense. Many newcomers have difficulties with finding an affordable place to stay, as the price rise of accommodation and food in Kiev is evident, too. “People are forced to stay in the streets, asking the others for bread and water”,  reports Alexandr, an inhabitant of the city centre.

START FROM SCRATCH
In the middle of 2014 the Russian and separatist forces ceased military actions in the suburbs of Sartana city, inhabited mostly by Greek minority, Ukrainian soldiers hid behind impregnable entrenchments, leaving all the tanks and cannons in the multiple allotments scattered around the city. Whilst officials of both sides unanimously claimed to sign the armistice, the sound of the heavy artillery can be heard from a noticeable distance. The populace of Sartana appears to get used to that, trying to organize their lives from scratches. Just one hundred metres away from the observation post of the Ukrainian police, people are gathering at the entrance to the well-known Greek tavern. The local community meets there on a daily basis to dance zorba, drink wine and celebrate the next day without new casualties.

[divider]
Everyone became completely indifferent. Passport controls at the temporarily built sites are welcomed with impassiveness.

At a first glance everything here seems to be normal. Busses full of workers are heading towards Mariupol, an industrial city laying at the Sea of Azov. Women are strolling on the avenues with bags filled with goods bought in the local market. Also the museum of Azov Greek history, central sauna complex and zoo function faultlessly, giving an impression that nothing bad has ever happened in this area of tranquillity. But the truth is more upsetting. For instance, in the mid-October 2014, a rocket launched by the separatists exploded near a funeral procession, killing seven people. Living supposedly a normal life, people of Sartana remember all the deadly accidents from the past. And clamours heard in a short distance from the city only remind them that the agreement between the sides might be terminated at any time soon.

A STRANGE AND SILENT WAR
People from the villages near Mariupol are more and more irritated. The provinces are most affected by the military actions happening in the Donbass area. Soldiers regularly intrude into their cottages, searching for prospective saboteurs willing to confess locations of the hostile squadrons. – They are going everywhere – asserts Dasha, a landlady from Pavlopil, a small settlement to the North of Mariupol. – They even went to the pigsty! I survived the World War II but this is much worse. We live in one country and shouldn’t fight with each other – concludes Dasha. Pavlopil and the other villages are the main targets of a silent war between Ukrainians and separatists. While the first occasionally parade through Pavlopil to express Ukrainian reign over the village, the latter is trying to recruit new members able to report actions of the governmental troops. Some of the civilians are annoyed, but the majority pretends not to see what is really happening in the area. Everyone became completely indifferent. Passport controls at the temporarily built sites are welcomed with impassiveness. People look at the screen of the TV set unaffected by the presence of several Ukrainian soldiers, looking suspiciously for anyone who could belong to the separatist groups. Nobody wants to draw attention of the people equipped with real weapons.

BREAKING THE IMPASSE
Misha, an old miner from Mariupol, looks at the column of Ukrainian trucks with deep displeasure. – Why do they need this war? – he asks desperately. – For a long time our main worry was to have something to put in a pot. We were happy to have our families and relatives with us, here in the city. But they are gone. Nowadays, we are compelled to embrace every moment that is not chopped by the gunshots. I don’t like that; I don’t care which flag billows from the city hall. I just want my life to be as it was before this whole conflict – concludes Misha. His opinion is shared by the Ukrainian soldiers, who often travel to other big cities, mostly in the West of the country. Life in Odessa or Lviv looks completely different. There are no overlaps between daily concerns of the people living in Western and Eastern Ukraine. – I cannot believe that. I got a permit and immediately came to Kiev for a couple of days. How is that possible that people here are crying over the exchange rate between ruble and dollar, while we, in Mariupol, have nothing to eat? – moans one of the Ukrainian battalion member.

Nowadays, we are compelled to embrace every moment that is not chopped by the gunshots. I don’t like that; I don’t care which flag billows from the city hall.

He is not far from truth. People in Western and Central Ukraine indeed lead a somewhat different life. But they did not forget what is happening in some parts of their country. They just seem to be tired of all this conflict, trying to put their lives back to order. As the political impasse is ever lasting, Western Ukrainians are helping in the conflict financially supporting the charities sending food and water supplies to the people fighting in the war. Some of them are entering the army, the others pretend to listen to the next orations given by the local politicians, claiming that the conflict will come to an end soon. But no one appears to believe that. No one trusts the words of politicians any longer, as it was them who ignite the tensions counting on the verve of young men willing to take part in a real war. The originators of the war do not live in the affected area; they went away a long time ago , leaving the lives of the fellow nationals to their fate.

And in the streets of Kiev one can barely hear many insecure voices saying: “we should solve the conflict peacefully, we don’t want more problems”.