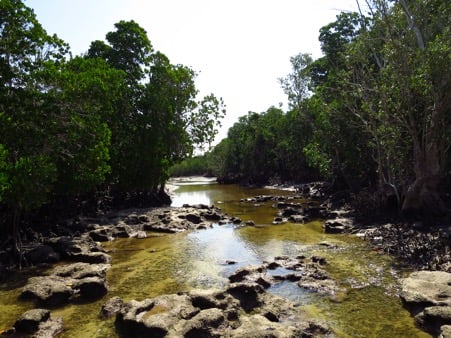 Why are conservation charities concerning themselves with contraceptives?

Facing global challenges of climate change, population growth, ongoing unsustainable resource use, and limited funding, sustainable development needs to be efficient and effective. With this in mind, environmental conservation organisations are implementing family planning projects, and charities traditionally known for their work in sexual and reproductive health are partnering with wildlife centres. There’s an evolving vogue for a multi-faceted, cross-sectoral, holistic approach to sustainable development known as “Population-Health-Environment”.

How was PHE born?
Twenty-five years ago, the United Nations Conference on Environment and Development announced 27 principles which emphasised the importance of interdisciplinary collaboration. Principle 1 stated: “human beings…are entitled to a healthy and productive life in harmony with nature. Environmental protection shall constitute an integral part of the development process and cannot be considered in isolation from it.” The recent launch of the Sustainable Development Goals (SDGs) highlighted, underlined, and put in bold the continued importance of integration between different sectors as the way of the future.

Conservation organisations often find themselves in remote, rural areas of incredible biodiversity. These areas can be logistically difficult to work in, and local populations may be all too familiar with the inverse care law. By partnering with community health organisations, one can benefit from the knowledge, experience, relationships with key stakeholders, local context and presence of the other. Partnership allows sharing of transport, offices, electricity, people, skills and support. The community may benefit from strategies for sustainable resource use alongside improved access to basic community health services. In areas with an unmet demand for contraception, being able to plan a family could improve food security, ease pressure on natural resources, and increase household income. As demonstrated by the Madagascar PHE network, synergies between the priorities of the partnering organisations may be realised. For example, integrated community meetings draw men into discussions of family planning, while bringing women into conservation efforts.

Not a walk in the park
Geographically and logistically, this work may be challenging. Identifying motivated people who are willing to take the responsibility of the role of community health worker can be complicated, especially in areas where schools are sparse. Ongoing support, education, follow up training as well as incentives to take part are necessary to ensure the continued success of the programme. Monitoring and evaluation of PHE outcomes is vital, however, it can be a complicated process with regards to identifying and accounting for confounders, and ensuring that as much as possible of the impact of the intervention is being measured.

Madagascar: a case study
Madagascar was recently thrust into the limelight by King Julian, an all-singing, all-dancing lemur. A biodiversity hotspot, it has been estimated that 95% of reptiles, 89% of plants and 92% of mammals are endemic to Madagascar (World Wildlife Fund 2015). However, the World Bank have ranked Madagascar at 206 of the 213 countries included with respect to gross national income in 2014. For comparison, Sweden ranks eleventh. According to the United Nations Human Development Report in 2014, Madagascar ranks 155 of 187 countries (and Sweden 12). Life expectancy is estimated at 65 years in 2013 – as opposed to 82 years in Sweden.

In rural southwest Madagacar, the Vezo population is defined by their relationship with the sea. Reliant on the ocean for food, transport, trade and with little access to any other resources, they are vulnerable. With a huge unmet demand for family planning services, couples were having more children than they would choose, putting additional pressure on limited marine resources. The reef system and mangroves were under strain not only from industrial fishing and climate change, but also due to increasing use of destructive fishing techniques to counteract the declining fish stocks. Access to health care is limited, and so women had few options if they experienced any pregnancy-related health concerns. Poor health comes hand in hand with poverty.

The marine conservation organisation Blue Ventures took a grassroots approach, listening to local communities and responding to their needs. Seeing that octopus was a very valuable commodity, together with one village they decided to try a temporarily closing part of the octopus fishing ground. As octopus has a short reproductive and growth cycle, it was expected that this strategy would increase productivity. Upon reopening the reserve, octopus landings were significantly greater: a tangible, visible success story of the economic benefits of resource management, which has encouraged other neighbouring villages to copy this approach. From this, a network of 25 communities created a number of permanent marine reserves and discouraged harmful fishing practices such as poison-fishing, by implementing locally enforced and legally recognised traditional laws. Additionally, introduction of alternative livelihoods, such as farming sea cucumbers and seaweed, provided an extra source of income.

Meanwhile, tackling the unmet need for family planning services was achieved by training local women as community health workers in partnership with Population Services International. These women have become trusted and respected ambassadors for health, educating their friends, families and neighbours about avoiding sexually transmitted infections, empowering women so that they can plan their pregnancies, and offering a range of modern contraceptives, including condoms, the combined oral contraceptive pill and depo-provera injections. Collaboration with Marie Stopes Madagascar enables women to attend outreach clinics for long-acting reversible contraceptives, such as hormonal implants and the intrauterine device. Concurrently, educational activities regarding water, sanitation, hygiene, maternal and child health, and environmental topics are facilitated with men, women and children. Integrated educational messages are also spread through theater and radio shows, as well as community discussions, targeting broad audiences and drawing them in to the conversation.

Where next?
PHE is greater than the sum of its parts. Integration is the future.  In the words of the SDGs: “sustainable development recognizes that eradicating poverty in all its forms and dimensions, combating inequality within and among countries, preserving the planet, creating sustained, inclusive and sustainable economic growth and fostering social inclusion are linked to each other and are interdependent.”Could Population-Health-Environment be the answer to achieving the Sustainable Development Goals? •